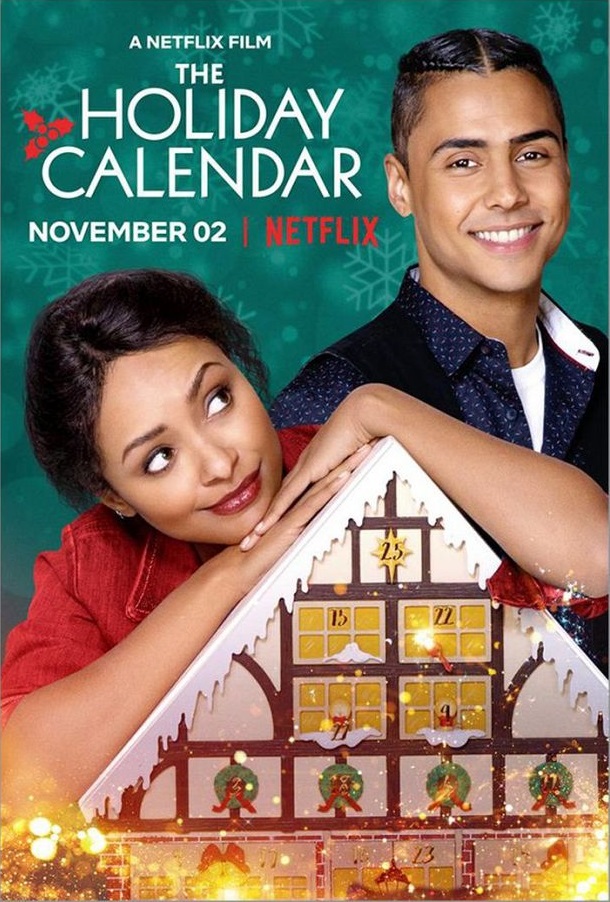 The movie gets some props from me at the get go!

So here’s the sitch……homegirl is your classic PPG (Practically Perfect Girl) that just can’t seem to land a break with her photography career.

She’s working a dead-end job taking photos of kids with Santa and horrible gigs like that. Been there homie, it’s rough. Her best friend is a hot also bi-racial photographer that just got back from traveling the world and taking photos of shit. He is our resident Home Town Hottie.

It’s obvious he wants to stuff her holiday stocking and she seems pretty receptive to the idea as well. I mean, just look at that raised eyebrow to the left.

One thing that is a bit hard to swallow with both of them is the inconsistency of their accents. It’s like they occasionally need to seem more urban and less like they are on the set of Gilmore Girls.

But shoots, I can’t talk….look at the writing on this post.

Anyways PPG (Practically Perfect Girl) gets this ginormous wooden advent calendar full of shit and some seriously nice tiny LED lighting from her silver fox of a grandpa. Am I just getting old or are they taking hot 44 year old dudes and giving them canes? Whatever, it’s working for me.

So the magic happens when she opens the calendar and each trinket found within predicts her day!

For example, one blessed morning she finds a pair of tiny boots inside the magical calendar and later that day her hot “friend” gives her a pair of cute boots he picked up for her in Italy. Because Home Town Hotties totally know your fucking shoe size and don’t mind lugging boots around the world for you in a backpack for months on end.

I’ve been with my husband for 13 years and I doubt he even knows my eye color!

Anyways some other shit happens and she ends up briefly dating some doctor who takes her on a date to volunteer at a soup kitchen and seems pretty okay. But alas the HTH is definitely in the friend zone now and gets all pissy about PPG missing the showing of A Christmas Story (she was suppose to dress up as the leg lamp). She is the fucking light of everyone’s life y’all.

PPG is still bouty bout this magic calendar but doctor dude thinks calendars are so 2009 so bitch dumps his ass. HTH might have a chance of escaping the trenches of the friend zone!

Anyways there’s some vomit-y event going on in the town and PPG gets her big chance to land a big photography client in the form of the mayor!

Alas HTH formats the memory card  and PPG loses her chance to impress the mayor with her photos of snow and merriment. PPG loses her shit on HTH (oh snap…maybe she’s not so perfect! She’s flawed, y’all!) and then gets fired from her dumb shitty job.

In anger she tosses the magic calendar into a pile of useless shit she’s like donating somewhere and proceeds to rot on the couch for three weeks.

BTW, I’m not sure where the hell she is living where her shit Santa job that pays $9.75 an hour affords her this gorgeous studio loft but I’m ready to move there. The place has high ceilings, West Elm furniture and what appears to be a 3K fridge based on my recent fridge shopping. Also there’s birch trees wrapped in Christmas lights in her living room! What the actual fuck?

Some other shit happens and she loses the calendar for seemingly forever. Silver fox grandpa (SFG?) says no bigs and that the calendar will come back to her. #creepystalkercalendar

So PPG gets the calendar back, the images from the formatted memory card were salvaged, the mayor calls and wants to party, HTH brings fucking cookies by her folks house and they make up…….

Then the kicker……..HTH buys a photo studio for the two of them that PPG had desperately wanted off his travel blog photos! OMG!!!!

It’s massive and beautiful and has lots of natural light. Fuck both of them and their actualized dreams!

So shit works out and things are great! I’m so shocked!

« Christmas with a View | Netflix Love at the Christmas Table | Amazon »